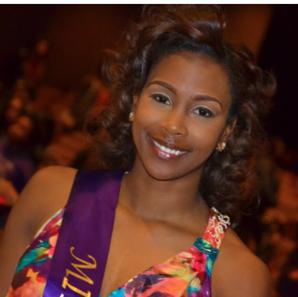 The daughter of  Dr. and Mr. Torye and Lisa Harris, Christian Harris is rising junior at The Lincoln University of PA. Hailing from Rochester, NY she is a dual major in Biology and Physics with a minor in Human Services.  Throughout her years at Lincoln,  Christian became very active on campus. She currently serves as the Student Government Association Executive Treasurer. Christian is a standout athlete in women's soccer; breaking the school record for goals scored her freshman year. She was ranked third in NCAA Division II for goals scored, and fourth in points per game. Christian was named Daktronics All- Regional First Team, ICAA Player of the Year,  and All- ICAA First Team.  Christian was elected the secretary of her class, joined clubs and organizations such as; pre-med club, the honors program, and Reconstructing Sister's Visions and Purposes, as well joining The Lincoln University Track & field team as a sprinter.  Academically she continued to maintain her GPA while joining more clubs and serving in many leadership positions, such as the: Admissions Student Ambassador Program, Senator of The Lincoln University Chapter of the NAACP and becoming the Vice- President of the class of 2017.  She has done research at the University of Delaware, department of a Material Science Under Dr. Stephanie Law. Christian has won numerous prizes for her work entitled "The Infrared Optical Measurements of Hyperbolic Metamaterials" Christian aspires to obtain an MD and Ph.D. specializing in Orthopedic Surgery and Material Science. Will be attending Marshall University's Joan C. Edwards medical school for her Ph.D in Biomedical Science in the Fall.